What Is The Keltner Channel? 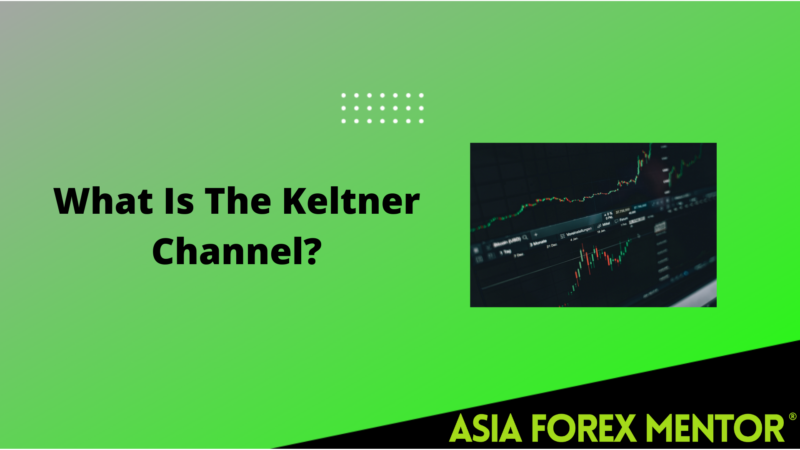 What is the Keltner Channel?

Financial markets are a dynamic environment with constant fluctuations due to industry factors and influences from traders that make investments looking for higher profit.

Technical indicators a regularly used to identify price movement, and the Keltner Channel is a popular option for day traders to evaluate the present trend and produce trading signals.

The indicator uses volatility and average prices to plot upper, middle, and lower lines. All three lines move with the price, making a channel-like presentation.

The Keltner Channel was created in the 60s of the last century by American trader Chester Keltner. The initial concept used simple moving averages and the high-low price range to measure the bands.

In the 80s Linda Bradford Raschke revised the indicator, creating a new blueprint that was implemented this time using the average true range (ATR).

The indicator is volatility-based collected from 3 independent lines. The exponential moving average of the price is represented by the middle line. Further lines are positioned over and under the EMA.

The strategy is to consider a closing price over the upper line as a strong bullish signal while a close under the lower line is bearish.

Most price action is enclosed in the two bands, progress the channel from the outside and can indicate a change in trend. The course of the channel, such as sideways, up, or down, can help in recognizing the course of the security. 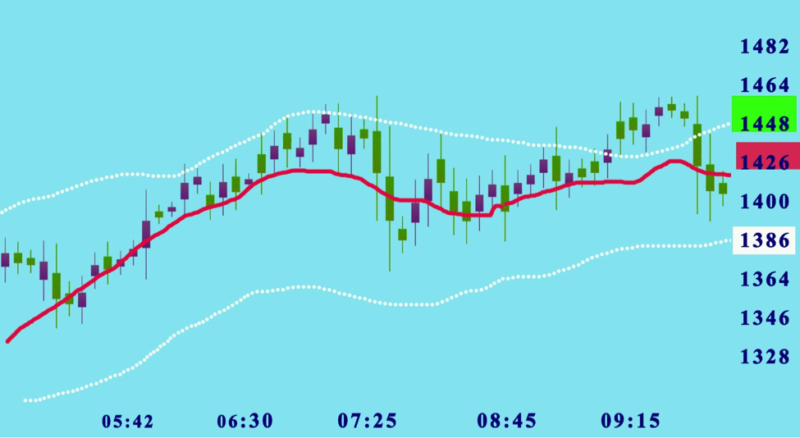 There are three phases in computing Keltner Channels. Choose the length for the exponential moving average. Select the periods for the ATR, and find the multiplier for the Average True Range.

The chart displays the default Keltner Channels in orange, a wider channel in violet, and a narrower channel in green. The blue channels were set three ATR values over and under. The green channels used one ATR value. All of them claim the 20-day EMA, which is represented by the dotted line in the middle. 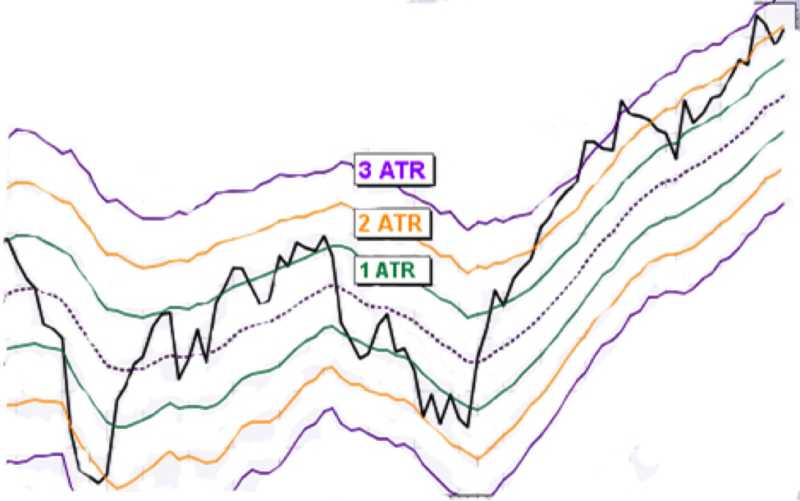 The indicator reveals differences in the Average True Range (ATR) for 10 periods, 50 periods, and 100 periods. Observe that the short ATR (10) is more volatile in comparison to the 100-period ATR is much smoother with a less volatile range.

Keltner Channels have several applications and how they are utilized is based on the parameters the investors are using. The longer EMA indicates a larger lag in the indicator, and the channels are not responding fast to price fluctuation.

While a shorter EMA means the bands acts fast to price alterations but that creates a situation where its more difficult to recognize the real course of the trend.

Traders can modify their Keltner Channels with these potentials.

The price move over the upper band displays the potential of the price. A further signal that an uptrend is forming, notably if the channel is bent upwards.

After a sideways period, if the price breaks over or under the channel, and the channel start to angle in the identical direction, that may signal that a new trend is coming in that breakout direction.

The drop under the lower band displays price fragility. This is proof of a downtrend, if notably the channel is bent downward.

When the price is striking the upper but not the lower band, then the price will eventually come to the former band and is a signal that the uptrend is decreasing in momentum.

The price can fluctuate between the upper and lower bands. In situation when this happens investors can utilize the bands as support and resistance.

Traders will attempt to purchase when the price touches the lower band and begins to go up higher again and can sell or short after the price begins to plummet after coming to the upper band.

The usual strategy is to purchase in uptrend if the price comes to the middle line. Implement stop loss is option amid the middle and lower band and put a target price near the upper band.

If you discover that the price is hitting your stop loss a lot move it closer to the lower band. This will create more space and minimize the frequency of losing trades.

In a downtrend sell short while the price regroups to the middle line. Put a stop loss about amid the middle and upper band and put a target close to the lower band.

This strategy takes advantage of the trending tendency and gives traders a good reward to risk ratio because the stop loss point is half of the target price length.

The concept is to buy if the price breaks over the upper band or sell short if the price drops under the lower band in the first half an hour from when the market opens.

Usually, the market is volatile right after the open, you may get one signal that results in a loss followed by another signal. Trade the second signal as well.

Take only two trade signals for this strategy in the first 30 minutes. If a big move doesn’t occur on the first two-channel breakouts, then it probably isn’t going to happen.

This strategy is best applied to assets that tend to have acute trending moves in the morning. If you notice that an asset is lethargic, and does not make big moves, then this is not the strategy to use on that asset.

Using the strategy on a security that doesn’t have volatile moves in the morning will result in many losing trades the price is doubtful to keep going after the breakout and will potentially reverse instead.

The usability of the Keltner Channels generally builds upon the parameters put in place. Investors need to determine how to implement the signal and then establish the channel lines to help achieve the plan. Few applications of a Keltner Channel will not function if the bands are tight or far apart.

The bands will not execute as support or resistance and they may look like they can offer no serious predictable potential.

This reason for this can be the selected settings, and without proof that the price of moving two ATRs or touching one of the bands will create a trading opportunity.

Keltner Channels enable investors to recognize trend course, and furnish trade signals, for more accurate results they need to be used in tandem with technical analysis, and basics if investing for the future.

If you want to make money in commodities a technical analysis indicator is needed a an Keltner channel will help you distinguish between an average price and a typical price on the market.

Keltner Channels creates three lines, expressed by a simple moving average with upper and lower bands indicated over and under this moving average. The broadness of the bands is dependent on a user-specific factor enforced to the Average True Range, the outcome is added to and subtracted from the middle moving average line.

Envelop indicators like the Keltner channel uses one upper and lower band to create a potent channel around the price range of a financial instrument.

Keltner Channels are a indicator that observes the course of a trend, created to locate the significant trend. Trend recognitions is just part of the process.

The flat trend requires a livelier approach, prices frequently peak at the upper channel line and trough at the lower channel line. The practice with every analysis technique, and the same applies to the Keltner Channels is to be used in combination, with other technical indicators and chart analysis.

The Keltner Channel is similar to Bollinger Band with an upper, middle, and lower Channel Line, but estimated in a different way.

Traders use the Keltner Channel to time your entry in a strong trend — buying the breakout or trading the pullback.

What does Keltner Channel Indicate?

The Keltner Channels is a useful technical indicator for day traders, helping them identify the present trend and offer trading signals.

The indicator uses the volatility and average prices are used to plot upper, lower, and middle lines. The three lines move with the price, forming a channel-like image.

What Is the Difference Between Bollinger Bands and Keltner Channels?

The difference between the two is that Keltner’s channels represent volatility using the high and low prices, and Bollinger’s bands depend on the standard deviation.

What Is the Best Setting for Keltner Channel?

When estimating the Keltner Channel indicator investors prefer to use a 20-period EMA and a multiple of 2 of the Average True Range (ATR).

How do You use Bollinger Bands and Keltner Channels?

Traders use Keltner channels and Bollinger bands to provide them with an envelope for price.