What Is Capitulation? – A Complete Guide 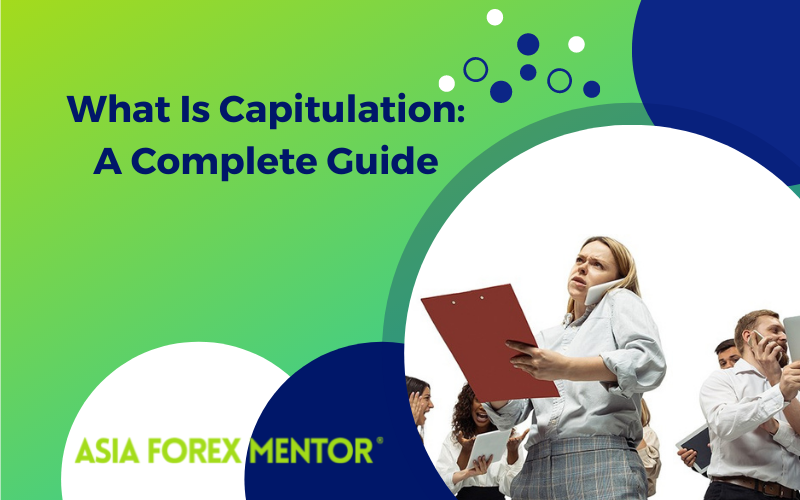 The term is usually associated with war, when a country surrenders. But it has found a place in trading, where when a broker wants quickly to exit the market, and is willing to surrender all of the earnings he has made. Capitulation is most often caused by panicked behavior, and investors attempt to close down their holdings.

The dictionary definition of Capitulation is surrendering under agreed conditions usually in the form of a treaty. The document is signed by the government and it defines the act of capitulations and it’s an agreement that defines what is expected from enemy troops. Capitulation occurs during high-volume trading and declines for securities. A bear market often makes investors panic sell.

When the capitulation selling finishes, traders expect bargain buying opportunities. The idea is that brokers that wanted to sell a stock, counting forced selling because of margin calls, has already sold. Theoretically, the price should reverse. Investors believe that capitulation is the sign of a bottom.

Traders often try to expect capitulation buying or selling. In reality, capitulations are after-the-fact outcomes. They result from the psychological pain that can be endured by brokers before closing their positions.

How Does Capitulation Work?

Capitulation occurs when security experienced a decline in value. There are four indicators that capitulation is happening or has happened.

Capitulations are frequently associated with investors who can stand the pressure, and not external forces. This negative sentiment may be the cause is communicated by the media, analysts, or other investors.

Rising interest in put purchases or option volatility indexes signals that investors are betting against a market or are intensively trying to hedge against price declines.

Large numbers of investors try to exit the market by selling their shares. This influences mutual funds to hold high levels of cash in order to meet those demands.

Capitulations often indicate turning points in the price action of financial instruments and underlying securities. Technical analysts can identify capitulation with candlestick charts. At the end of a selling frenzy when the price is lowest, often hammer candles form. This is the period capitulation sets in and indicates a price bottom followed by a reversal. Traders who sold their positions, did it when the fear reached a climax. But when panic loses steam, greed reverses prices.

While a shooting star candle forms at the end of a buying frenzy. The period when prices reach their high. Traders who planned to purchase a position have done it, and the panic of missing out has reached the limit. The greed of getting a position at any price goes down when prices fall fast. When the last bunch of buyer’s notices that their positions are declining, panic starts to manifest in the market. Prices continue to fall, buyers who purchased earlier start to sell their positions to save profits or limit losses.

Capitulation and Trading in Other Words

It is a rare phenomenon but a real market circumstance. The major selling that during capitulation provides numerous methods to profit from it if identified properly. Short selling is the leading method of capitulation trading.

This is the easiest way. The indicators of capitulation are obvious to anybody looking for them. This enables day traders to launch the positions from a higher point and make quick profits before the market reaches the lower level.

An alternative method of capitulation trading is to call the bottom of the selling. Trading this way is riskier. It can be difficult to recognize when the extremity of a capitulation has occurred. This can open the day trader up to massive losses if he starts trading too soon. Capitulation often happens quickly. The pressure of selling gets to the maximum point in one day, sometimes hours. That’s why investors need to be scrutinizing the security as a possible option for capitulation and be prepared to open the short position as the selling starts.

ime is the best way of recognizing the bottom of a capitulation. The market factors that drive capitulation are fleeting. When the ill-positioned investors in the market have sold. The level of reason will return.

This summer we witnessed the first serious crisis in cryptocurrency after China placed restrictions on trading the digital coin.  This created panic in the market. Many thought that Bitcoin will be made useless and investors tried to prevent losses by selling their assets. China has played this game before, limiting the crypto just to bring it back. That motivated brokers to use the fear and buy as many Bitcoins in the expectation that it will reverse in price.

In one period of the crisis, Bitcoin declined by 40%, verifying fears that it is capitulating. The coin bounce back and buyers didn’t panic, but decided to use the desire of others to offload their assets, bought more cryptocurrency, and made a profit.

There is no proven way to identify capitulation before or when it is happening.  Still, because capitulations reflect the final bottoming-out of an asset, prices usually rise after a capitulation. Capitulations can indicate the beginning of a turnaround.

It can be useful to know when capitulation is happening. If you have good analyses of the situation and think that it is panic-driven and not caused by other factors then you can take advantage of it and profit.

The unpredictability of capitulation events can pose a risk to day traders who want to trade them. When you learn that the process is happening, it is often past the opportunity to profit from it.

Technical indicators are used by day traders who prefer to trade a capitulation. They help them analyze the fast-changing price action to locate where in the capitulation is happening. Particularly useful are hammer indicators to identify the low of a capitulation.

History is full of references to a town or country that has capitulated. The outrage by the population is also caused by panic. Trading has many similar factors. Frequently traders surrender their positions.

What is capitulation in the stock market?

When investors start panicking about the future value of the stock they have in their portfolio, they start selling it, this causes high-volume trading sometimes at bargain prices.

What does capitulate mean?

In a military context, it is the surrender of one side in a war. The term is used in sports but also in other areas where there are sides that want to quickly exit their situation.

Is capitulation the same as surrender?

Yes, it is the same. But usually, capitulation means that one side admits defeat and accepts terms. And will no longer participate in the activity or war depending on the context in which the word is used.

What is a synonym for capitulation?

The synonym most used is surrender.